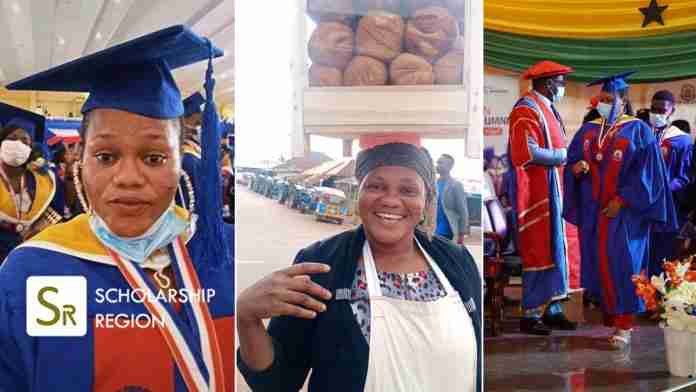 A determined young woman named Priscilla Akwagu emerged as one of the best graduating students of the University of Education Winneba, Ghana in 2021 after hawking food across the streets to generate money to fund her education.

Priscilla Akwagu who graduated with a Bachelor’s degree in education made it a priority in her life to be educated regardless of her present status. “Being able to strike between slaying and hustling when necessary makes you stand out,” she wrote on Facebook.

According to him, Priscilla hawked bofrot – a traditional African snack made of fried dough – throughout her four years study at the University of Education. She not only graduated with honours but also emerged as one of the best graduating students with a first-class degree.

Reacting to her story which has inspired many across the world, Priscilla said she has been amazed by the words of encouragement and congratulatory messages she received after her graduation. She noted that it will make her work harder and become a better person.

In another inspiring story, a young Nigerian Lady named Solace Ojotule, whose mother was abandoned by their family after the death of her father has overcome tough struggles to win the Mastercard Scholarship to study in the United Kingdom.

Solace Ojutule narrated that her father died when she was at the age of 4 years and immediately after his death, the paternal family seized all her father’s properties because her mother bared no male child.

According to Ojotule’s narration, her mother bared 5 children including herself and all of them are females. Read the full story HERE.