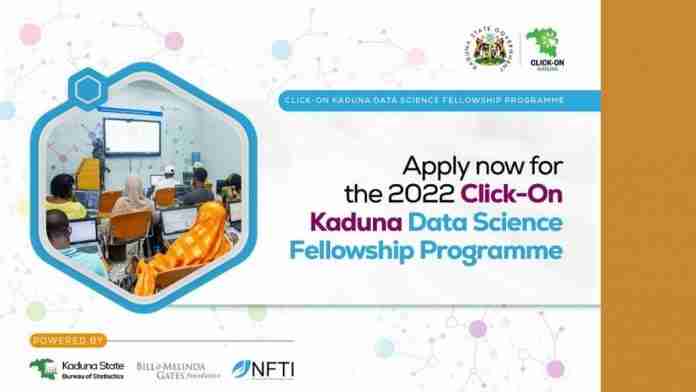 Applications for the 2022 Kaduna Data Science Fellowship Programme has called for applications from interested and qualified young graduate students.

The fellowship programme gives young graduate the chance to upgrade their skills and develop a career in the most sought after industry in the world.

In 1967, Kaduna became the North Central State’s capital, created from the Northern Region. By 1976, General Murtala Mohammed gave the state its name. In 1987, the military administration of General Ibrahim Babangida created the state of Katsina from Kaduna. Interestingly, the Nok tribe, one of Africa’s earliest civilisations, is located within the area that makes up Kaduna.

The 2022 Kaduna Data Science Fellowship Programme is an opportunity to develop necessary skills to work with the Public Sector across Health, Education, Agriculture and Infrastructure to make impact through the use of data.

The fellowship also aims to contribute to development planning, public policy, and use of data for evidence based decision making in the Health Sector.

Participants of the programme will benefit from the following:

The Programme is expected to last for a 6-month period divided into a 3-months intensive training programme and a 3-months paid internship, where participants would have an opportunity to work closely with the Amina J. Mohammed SDGs Data Lab under the Kaduna State Bureau of Statistics. Fellows will also be posted to MDAs especially the State Ministry of Health and Other Agencies to support in data coordinating effort that will provide impact to society.

Click on the button below to commence your application.

Have any questions? – Click HERE to let us know and we will be glad to help | Email: scholarshipregion@gmail.com