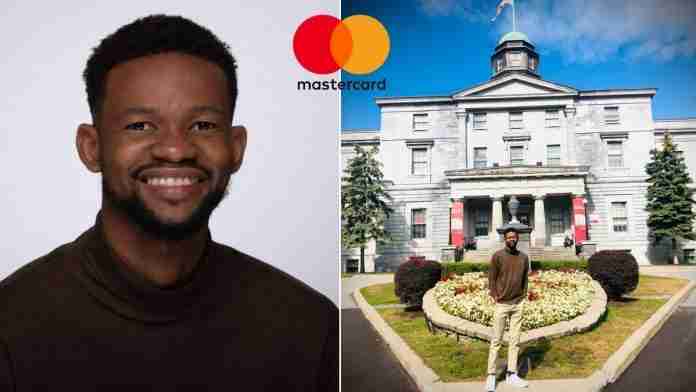 A Nigerian Microbiologist by name Ekundayo McCoy Afuape has won the prestigious Mastercard Foundation Scholarship to study a Full Time Masters degree on Epidemology at the McGill University, Quebec, Canada.

The Mastercard Foundation Scholarships sponsors students from across the world to study a Masters Degree at the McGill University every year. The Mastercard foundation also sponsors educational grants in several other universities in the UK, USA, Canada and also in Africa.

According to the information on the McGill University website, applications for this year is closed and interested persons are advised to wait till 2022 when it will be reopened. Here at Scholarship Region, we track this and many other scholarship opportunities in the world to ensure you stay up to date and also remind you of scholarships whenever they are available – to get our updates, join our WhatsApp group HERE.

Ekundayo McCoy Afuape who is one of the 30 winners of the Mastercard foundation scholarship at the McGill University for the year 2021 took to his twitter handle to celebrate his success.

He had graduated from the Federal University of Agriculture, Abeokuta (FUNAAB) in Nigeria with a First Class in Microbiology, having a grade of 4.72 out the possible 5.00 points.

Ekundayo McCoy Afuape was selected alongside winners from Kenya, Uganda, Burundi, Uganda and many other African countries. He shared his story on Linkedin saying “HARD WORK BETRAYS NONE”.

According to him, he won the Mastercard Foundation Scholarship after bagging a First Class in FUNAAB despite that he failed to gain admission into the university in four consecutive years.

“My joy knew no bounds as I was previously rejected for the same scholarship at the University of British Columbia, Vancouver. Being a first-generation BSc and MSc student, the news meant the world to my family and I,” he wrote on his Linkedin page.

He explained that he has started his Masters Degree since the 1st of September with his research focus on Epidemology with a concentration on Environmental and occupational health at McGill University in Montreal, Quebec, Canada.

“Alhamdulillah! On the 1st of September, I started my master’s program in Epidemiology with a concentration on Environmental and occupational health at McGill University. I look forward to developing my knowledge and expertise in investigating and developing innovative solutions to environmental health problems in my community and beyond and also insipiring future generations,” he said.

He thereafter thanked his friends, families and mentors for supporting him throughout the application process.

“This feat would not have been possible without the help of friends, families and mentors. I would like to say a big thank you to Hassanat Lawal who has always been at my beck and call whenever I needed to draw from her wealth of experience. I also want to to thank Chinonso Odebeatu for reviewing my essays within a short notice. Thank you Adeola Alle for the amazing job you’re doing on Scholar’s pivot as it was of immense help during my application.”

He finally advised that all scholarship aspirants should keep working hard, never give up and connect with the right people.

Have any questions about Scholarship Opportunities? – Click HERE to let us know and we will be glad to help.