Young African Lady fights back after failing WAEC, graduates from university with first-class in Law 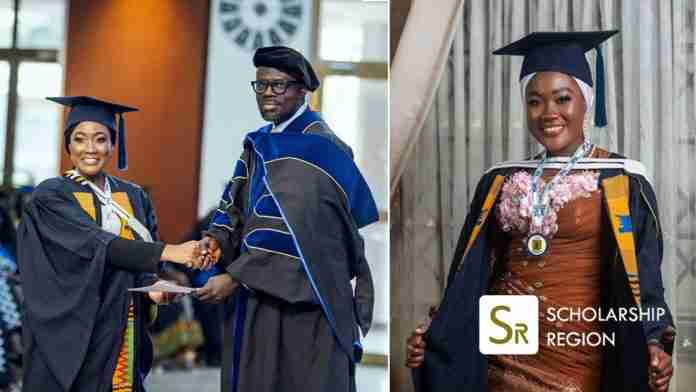 A determined young Lady from Ghana named Naziha Amin Gombillah has fought back to emerge as the best graduating student of the University of Professional Studies (UPSA) after initially struggling to gain admission into the institution.

Speaking on her journey to achieving outstanding academic success, Naziha Amin narrated that she struggled to gain admission into the university after failing Mathematics in her first West African Examination (WAEC).

She had to resit the examination the following year, delaying her academic progress by a year. She expressed that not only was it difficult to gain admission, but she also struggled with courses while in school. “Even at the university level, there were times it got tough,” she said.

“I thought I would resit certain courses, but giving up never crossed my mind. I had started it, so I had to complete it. I had to make my parents proud,” she added.

Her determination to succeed paid off and now she aspires to be an International Energy Law expert, a lecturer and a guru in the fashion industry citing that what seemed like a setback for her a few years ago was actually the beginning of multiple opportunities for her.

SR - January 16, 2023 0
The Romania Government, through the Ministry of Foreign Affairs offers Scholarships to foreign citizens to study for Undergraduate, Masters and Doctoral Degrees for the...
Load more

Naziha Amin expressed gratitude to God for granting her the ability to strive and succeed, UPSA reported.

“She thanked the Almighty Allah for His unfailing support and also acknowledged the management as well as faculty of the University for their commitment to service, advice, and encouragement, which were all geared towards moulding her and her graduating cohort into professionals.”