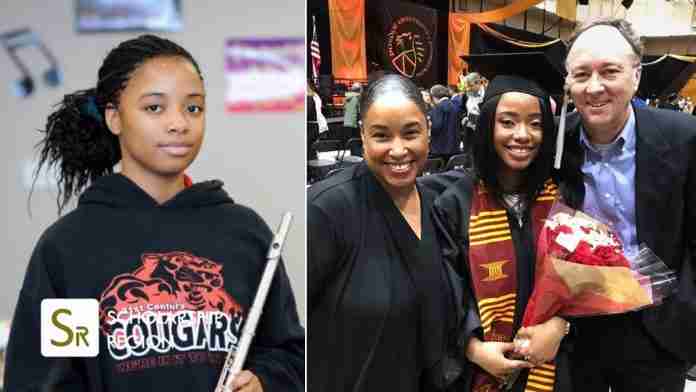 An exceptional 18-year-old Lady, Raven Osborne has set a new record after graduating with a Bachelor’s degree in Sociology before completing High School in the United States.

Raven Osborne earned her college degree two weeks before graduating high school and graduated as a straight-A student and the best in her class. Raven started her High School journey at the 21st Century Charter School in Gary, Indiana, United States.

The School is a free public school, and one of six charter schools around the United States run by the GEO Foundation, which aims to provide students in impoverished neighbourhoods with access to quality education.

“When I was in 7th grade, I learned that 21st century paid for college credits, the books, and transportation. And my family and I all thought that was really awesome and hard to believe. […] That was a great motivation.” Raven tells Teen Vogue.

As part of the requirements of the school, students are required to take at least one career certificate or college class and the transportation, textbooks and tuition to do so are provided. Worried about college debt from an early age, Osborne decided to take as many college classes as she could while the costs were covered, she narrated to People

She started taking College classes when she was in 9th grade, and after two years transferred to Purdue University’s Northwest campus, where she recently received her diploma.

“When I saw that I would earn my associate’s degree at the end of my 10th-grade year, my mother encouraged me to talk to [Kevin] Teasley, who was the superintendent of the school, and ask him about another program that would allow me to continue earning college credits. He and Mrs Teasley both told me that I could go as far as I wanted with the program,” she narrated.

Studying in the United States opens you to a lot of opportunities and connections. At Scholarship Region, we keep track of Scholarship opportunities around the world that can fund your study abroad so as to inform and remind you whenever they are available.

Raven took as many courses as she could and later graduated with a Bachelor’s degree in Sociology from Purdue University Northwest, Indiana, United States.

“It was definitely a lot of work,” she says. In order to stay motivated, she says her mom, Hazel Osborne “did remind me that the goal wasn’t too far off, and I was near the finish line. And…I had support from GEO, I had support from some people at 21st century, so I was surrounded by support.”

Speaking about her success, Kevin Teasley, the CEO of GEO Foundation, says “She’s a ceiling-breaker, a mold-buster, an incredibly disciplined young lady. The world is her oyster now.”

Osborne says she doesn’t feel like she lost out on anything during her high school years. She still went to movies, baseball games and bowling with friends and took a summer vacation last year.

“Maybe I didn’t do as much as my classmates have done, but I don’t feel like I sacrificed that much and I don’t have any college debt and that is amazing,” she says.

She thanks her mom for supporting her and instilling in her a drive to succeed. “I’ve been in a household where education has been valued,” says Raven.