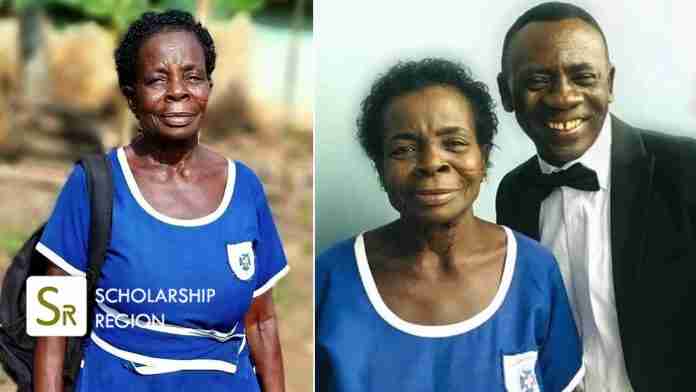 An exceptional 57-year-old woman from Ghana, Elizabeth Yamoah has summoned the courage to re-enrol in high school with a mission of achieving her lifelong dream of becoming a Nurse.

According to reports, Elizabeth Yamoah re-enrolled in junior high school alongside her granddaughter at Agona Odoben Presby JHS, a feat which saw her inspire many young adults across Africa and beyond.

Sharing her story on social media, Nana Akua Asidedua noted that there are a lot of old people who still love to go back to school but could not make it far because of home and financial issues. She hailed Elizabeth for being a role model to them.

Elizabeth was reported to have taken the Basic Education Certificate Examination (BECE).

In another story, 62 years old mother named Belinda Berry set a new record at the Chicago State University, United States after graduating at the same time as her granddaughter who is 25 years old.

Belinda Berry and Karea Berry, her granddaughter both earned their college degrees on the same day from the Chicago State University and became the first-ever grandmother-granddaughter duo to graduate from the institution simultaneously in the school’s 150-year history.

Speaking on her achievement, Karea Berry says her success and that her grandmother meant the world to her.

“It meant the world to me, because that’s the person, aside my from my daughter, that means the most to me. To be making her proud while she was making me proud was so awesome,” she said.

Studying in the United States opens you to countless possibilities and connections with world industry leaders. At Scholarship Region, we keep track of Scholarship opportunities around the world that can sponsor your education so as to inform and remind you whenever they are available.

Karea Berry who is also a mother of one revealed that they are both enrolling for a Master’s degree to advance their education. She narrated that she did not imagine she would be graduating at the same time as her mother when she enrolled.

However, two years after she commenced her studies at Chicago State University, she took time off after her daughter was born. She returned full-time after earning enough money to continue her education and by that time, her grandmother had caught up with her.