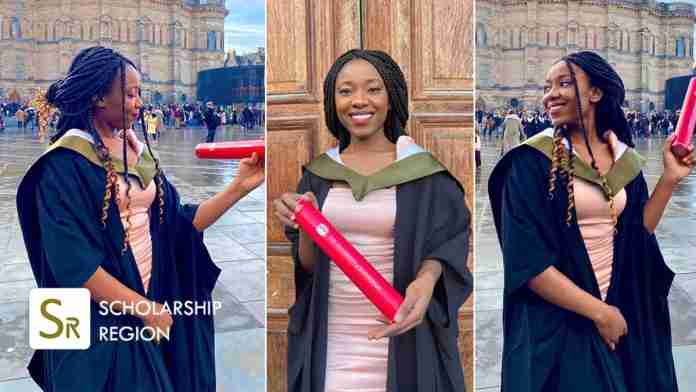 A young Nigerian Lady named Solace Ojotule has earned a Master’s degree in Africa and International Development from the University of Edinburgh, UK.

Solace Ojutale who narrated that herself and her mother had to overcome tough times after being abandoned by her father’s family due to the death of her father.

She narrated on LinkedIn that her father died when she was at the age of 4 years and immediately after his death, the paternal family seized all her father’s properties because her mother bared no male child. According to her, her mother bared 5 children including herself and all of them are females.

“The girls were abandoned with their mother after all properties have been seized by paternal relations. Then the real struggle began for us as kids and for our mother who was now both the father and mother. All hopes went down the drain and it looked like there was no future for me. Life ended before it began in the real sense,” she wrote.

Her mother struggled to pay for their school fees throughout her primary school education. After her primary education, she recalled that she was unable to proceed to High School due to funding and would hawk when her colleagues are going to school.

Solace Ojutale later won the Mastercard Scholarship, which granted her the opportunity to study at the University of Edinburgh in the United Kingdom.

Solace Ojutale finally graduated from the University of Edinburgh with a Master’s degree in Africa and International Development. Celebrating her achievement she described her success as a success for her mother too.

“It all began last year when a simple email from the Mastercard Foundation Scholars Programme at the University of Edinburgh transformed my life, bringing to reality the dream of having a Master’s degree that I have nurtured for years in just a minute,” she wrote on LinkedIn.

“This degree is not just for only me, it is for my Mum and all widows who have gone through thick and thin to give their children the best,” she added.

She thanked the Mastercard Scholarship Foundation for investing thousands of pounds on her. “I’m grateful to the entire team for their support throughout this one year. I’m full of gratitude and I pray God repays them in double fold,” she said.

The University of Cambridge MasterCard Foundation Scholar Program is ongoing and is expected to close by January 2023, click HERE to apply now.