Young girl who was rescued from being homeless passes her first exam in school, set to become a successful artist 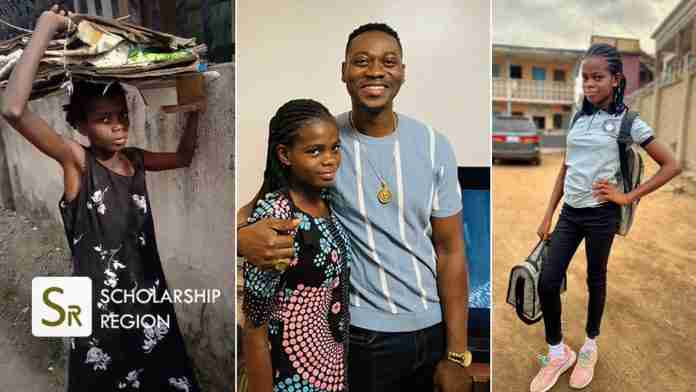 A young Nigerian girl known as Odunayo who was rescued from being homeless has passed her first examination after being enrolled in junior school.

Odunayo was rescued from a street in Lagos by a generous man named Tunde Onakoya while she was hawking fish. According to Tunde, Odunayo was rescued two years ago alongside her brother while they were hawking instead of being enrolled in school.

He narrated that Odunayo had been a victim of several waves of abuse as a result of her inability to enrol in school. “It was on this day I swore to be a part of lives and keep them safe forever,” Tunde said.

He later sponsored her education through a fully funded scholarship and two years after, he shared Odunayo’s progress on his Twitter handle. He said; “Today makes it exactly two years since I met Odunayo hawking fish on the streets of majidun Ikorodu street with her little brother. A lot has happened since then, but two weeks ago, she completed her first year of school and passed her examinations.”

“She’s now growing into a young confident Lady who loves to play chess and video games,” he added.

Tunde narrated further that Odunayo’s dream is to become a performer as she is very interested in Arts and is an active member of the cultural dance club in her school and church.

He invited Lateef Oladimeji, a top actor in Nigeria, to visit Odunayo and reassure her that her dreams are valid.