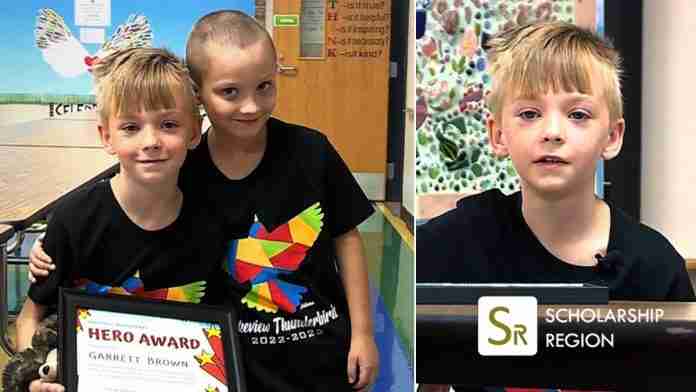 An 8-year-old boy named Garrett Brown has won a hero award after saving the life of his classmate who choked on food at Lakeview Elementary School in Norman, Oklahoma, United States.

A music teacher at the school, Jordan Nguyen, narrated that the incident occurred during lunch. “It was chicken nugget day and the kids absolutely love it. But during that lunch, a teacher’s and parent’s worst nightmare happened,” Nguyen told Good Morning America.

According to her, Cashton York, a third grader at the school was busy enjoying his lunch with his friends when he “took a bite and started choking”. “He couldn’t breathe,” she narrated.

Immediately after the incident occurred, his friends called for help however, Nguyen who was the eldest in the room explained that she was at the other end of the room and had to rush to the scene of the incident. “I was on the other side of the cafeteria and when I heard them scream, I ran to the students. However, there was one student, Garrett, who went way above and beyond just shouting for help,” she explained.

Before getting to the scene, Garrett Brown, a classmate of Cashton York, has started performing the Heimlich manoeuvre on his classmate.

“Instead of shouting, he jumped to the other side of the table, went behind Cashton and did a couple thrusts of the Heimlich maneuver, and it only took about two thrusts and he was able to dislodge the food,” Nguyen recounted. “By the time I reached Cashton, the food had already dislodged and he was breathing again.”

The Heimlich manoeuvre is a type of first aid technique which involves abdominal thrusts, back blows or both. Explaining how he was able to quickly perform first aid on his classmate, Garrett Brown said he learned the technique from his father.

“When it was done, we all took a breath and thought, ‘Did that just happen? Was that for real? Did this really just happen?’ And we had to go back and watch the security footage just to be sure that ‘Oh, that is what happened. Oh, my goodness.’ It was pretty mind-blowing.” Nguyen recalled.

Cashton’s mother, Tiffany Smith, told KOCO that she was thankful Garrett was able to spring into action when her son started choking.

“That was extremely scary to know that in a matter of seconds, my child could have choked to death on food at school when you’re not around. There’s not enough words to be grateful for saving him.” Smith said.

Lakeview Elementary honored Garrett at the school assembly for his quick actions to save his friend. Nguyen presented Garrett with a special “Hero Award” certificate on behalf of the school.